Now that the 2020 Draft is over we can start looking into next year. Once again the receiver class will be very deep and has many talented players that could go in the first round of the 2021 draft. Here are some receivers worth watching in the coming season.

Bateman finished the 2019 season with over 1,200 receiving yards and 20 touchdowns. Bateman is an elite route runner that separates instantly at the line of scrimmage. His ability to run a slant route is similar to Saints receiver Michael Thomas. Bateman a very reliable 3rd down target, but also possesses the speed and size to be a big-play threat which evidenced by his 20.3 yards per reception average.

In the 2019 season, Ja’Marr Chase was a fundamental part of the LSU offense finishing with 20 touchdowns and 1,780 yards. Ja’Marr Chase excels against man coverage with good speed off of the line and quick releases. Against zone Chase is second to none, he recognizes the soft spots in the coverage and is able to sit on drags and crossers, with great run after the catch ability. Chase’s technique combined with his athleticism makes him one of the hardest receivers to stop at the college level.

Waddle is an Alabama receiver who has played in the shadow of Jerry Jeudy and Henry Ruggs but now that they are gone it is his time to shine. In the 2019 season, Waddle only had 560 yards on 33 receptions but expect both of those numbers to increase exponentially. Waddle is a receiver that has great speed and run after the catch ability. Waddle excels as a deep threat with fantastic deep route running and the ability to turn defensive backs’ hips. He has all the skills to produce big numbers next year, just needs the opportunity.

In Rondale Moore’s freshman year he set Purdue’s all-purpose yard record in a game with 313 yards. That year he also had 114 receptions to go along with 1,258 yards and 14 touchdowns. Expectations were high for Moore in his sophomore year but unfortunately, he only played in four games the 2019 season and suffered a hamstring injury. Moore has also been dealing with a finger injury in the offseason that has been limiting his practice in spring training. Due to these injuries, there are a lot of question marks going into the 2020 season but if Moore returns to his old self he will be one of the best receivers in the nation.

Atwell is a receiver for the Louisville Cardinals. Atwell has great speed and could be one of the fastest receivers in college football. In high school, Atwell played quarterback but decided to switch to a receiver at Louisville. With only two years of receiver experience, Atwell recorded 1,276 yards and 12 touchdowns on 70 receptions. Atwell relies on his speed to get separation from defenders but with another year of experience and time to improve his route running he could become a very good deep threat and big-play receiver.

Wallace is another receiver who struggled with injuries in the 2019 season. Similar to Rondale Moore Wallace looked ready to shine but now has a lot of uncertainties going into the next season. Tylan Wallace is a receiver that thrives on making contested catches and with his athleticism, he has great strength and can run defensive players over after the catch. However, he does not get a lot of separation on his routes and instead makes spectacular catches because of his vertical and great hands. This could be a problem in the next level where the defensive backs are much more athletic. If Wallace can take his game to the next level and beat corners off of the line and in space he could be very difficult to stop.

Smith is another Alabama receiver who is waiting for his opportunity, and he kind of got it last year. He became one of Alabama’s most reliable targets with great hands and good speed. At Alabama, Smith is a great route runner who reads what the defensive backs are giving him and attacks where they are vulnerable. He is one of the most reliable receivers in the class and finished with 1,256 yards and 14 touchdowns. Smith just doesn’t possess the same big-play potential as other receivers. However, he gets the job done and will guarantee a first down.

Ross has been the number two guy on the Clemson depth chart for the last couple of seasons. Now that Tee Higgins has been drafted Ross will become Trevor Lawrence’s new favorite target. Ross has great size and catches almost every pass, making him very difficult to cover. He will shine as the number one receiver in the Clemson offense. Expect his 2019 numbers of 865 yards and 8 touchdowns to increase dramatically.

Roberson Jr finished the season with 803 yards and 6 touchdowns sitting behind target hog James Proche who had 111 catches, 1,225 yards, and 15 touchdowns. Those targets that Proche once had are now going to go to Reggie Roberson and he will benefit greatly. Roberson is a talented receiver with great deep route running and the speed to spread the field. A guy who might not be as reliable as Proche but definitely more athletic. Roberson is a player to watch and should put up big numbers next season.

Surratt is a 6’3” beast. Surratt is an excellent redzone target with a big frame and a surprising quickness on his cuts. For a receiver his size, Surratt is a decent route runner and can get separation with not only his size but his route running as well. He was a key part of the Wake Forest offense and finished with 1,001 receiving yards and 11 touchdowns, definitely a guy to watch in the coming season. 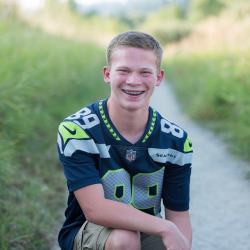