There were 256 draft picks made last week at the 2020 NFL Draft. Another hundred or so players were signed as undrafted in the days following the draft. Despite all of the draft picks, one can’t stop thinking about one draft pick in particular: former Wake Forest linebacker Justin Strnad, who was drafted in the 5th round by the Denver Broncos. A downhill, hard-hitting, pass covering linebacker to be exact. Could Strnad be the best-kept secret for the Denver Broncos not only in 2020, but years down the line? He absolutely can. He has the tools to be someday an all-pro linebacker and perennial pro-bowler. The talent he displays is limitless.

In a draft where the Denver Broncos surrounded second-year quarterback Drew Lock with a bevy of talent, which includes Jerry Jeudy, KJ Hamler, and Albert Okwuegbunam, Strnad silently flew under the radar at a position of need for the Broncos. Sure, getting yet another tight end after getting Noah Fant, and adding not one, but two receivers to the Broncos tandem of DeSean Hamilton and Courtland Sutton is suddenly an embarrassment of riches. But adding a feature piece to your linebacker depth that could become a star is even better.

One of the hardest-hitting players in the draft was undoubtedly Justin Strnad. He stands at 6′ 3″, and weighs 238 lbs which is not an ideal size for a linebacker. But if you enter his zone, you better believe he is popping anything that stands in his way. Strnad was a force at Wake Forest, totaling 244 tackles, with 22.5 tackles for loss over four seasons. In other words, if he is within your reach, he is more than likely going down. Just ask 2022 Quarterback prospect, Sam Howell, about him.

Filed under: How to be a senior linebacker.

Watch Justin Strnad pre-snap, he shifts Ja'Cquez Williams inside to have outside lane to QB. pic.twitter.com/zmIjmDO0FK

When you are a bit undersized for a position, teams begin to look deeper into your motor, and how you operate in space. Strnad checks both of those boxes. When you watch him on tape, his fluidity and ability to change direction on a dime sticks out. What Strnad may lack in physical tools, he makes up in his ability to come chase ball carriers, scrambling quarterbacks and receivers down. Strnad is truly a sideline-to-sideline backer with the closing speed and athleticism to take direct angles to attack ball carriers. That trait is truly undervalued, especially with raw prospects. You may even hear a familiar player being chased down by Strnad.

It's pretty evident when you turn on the tape for Justin Strnad he's got a high motor. Here he is playing until the final whistle. Missed assignment by his teammate, he chases down the receiver who has a surefire touchdown if he doesn't. Instead? Strnad punches the ball out. Huge pic.twitter.com/WnG69M9R3e

If there is one thing that makes Strnad stand out from other linebackers in this draft class is his ability to cover. Not many linebackers ahead of him can drop back and get consistent pass breakups in coverage. Strnad showed the ability with the Demon Deacons to provide tight coverage on tight ends and running backs, and defend without drawing penalties, which can be tough for linebackers to do on choice routes. Strnad typically holds his own, and with a secondary that continues to improve in Denver, Strnad’s ability to move his hips fluidly and to eat up space could bode him well for the Broncos third-down coverage packages.

And like I said, Justin Strnad leads his team in PBUs. This one happened during the final minute of the UNC game as the Tarheels were trying to drive for the come from behind victory. Strnad was in on all three of the tackles following this PBU, effectively ending the game. pic.twitter.com/zq7AmkOCvk

By no means is this article attempting to advocate Justin Strnad as a Day 1 starter for the Broncos. Strnad is far from the perfect prospect by any stretch. Improvement needs to be made to consistently use his hands to shed blocks, trust his eyes more in not only coming downhill but also in coverage among other things. Not to mention the recovery from the torn bicep during his senior season at Wake Forest.

However, pairing Strnad’s ability in coverage, pop behind his pads, and range to an already stout front seven that features Bradley Chubb, Von Miller and Jurrell Casey should make offenses in the AFC West wary for the future. Strnad will make an impact on special teams early on and will find a way to get significant playing time on this defense by late 2020 or early 2021. 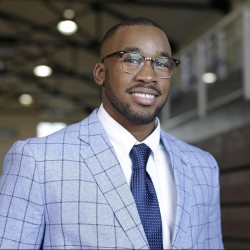