The Denver Broncos double-dipped by selecting two wide receivers with their first two picks in the 2020 NFL Draft. What kind of impact could these rookie receivers have on the Broncos offense?

By selecting Alabama’s Jerry Jeudy and Penn State’s K.J. Hamler with their first two picks of the 2020 NFL Draft, general manager John Elway made it abundantly clear: offense, offense, offense. The Broncos got a taste of what Drew Lock could do in their last five games, and the organization feels like he could be the franchise quarterback they’ve been looking for since the retirement of Peyton Manning. The team also added more firepower to the offense by signing former division rival Melvin Gordon to supplement Phillip Lindsay in the backfield, and they also invested in the offensive line by signing former Lion Graham Glasgow.

By building around their young quarterback, the offense that hasn’t finished above 22nd since winning the Super Bowl in 2015 has a chance to truly explode. Now that new offensive coordinator Pat Shurmur has Jeudy and Hamler, let’s take a look at what they could do to help this Broncos offense.

Jerry Jeudy was a part of one of the most dangerous wide receiver corps in all of college football and was arguably the best receiver of this draft class. With 4.4 speed and insane route running abilities, Jeudy has the potential to be a genuinely explosive weapon across from Courtland Sutton. Jeudy utilizes his speed and elite footwork in his routes to lure in defenders and get the maximum of space off of his breaks.

@pff_seth since I can tell you’re curious, here’s my @jerryjeudy blaze out route breakdown. Speed release to 7 yards, 3 yards to post, break flat to sideline. Sell eyes, shoulders and hips to win on the blaze out route. @AlabamaFTBL @Broncos #Broncos #BroncosCountry #RollTide pic.twitter.com/FCfo7o1zgi

As for Hamler, his route running abilities are severely underrated. The part of Hamler’s game that could open things up for the Broncos is his speed. While Hamler didn’t run an official 40-yard dash at the NFL Combine, Hamler was rumored to have run a sub-4.3 40. This type of speed and explosiveness can help the Broncos offense catch up to their division rivals and Super Bowl champion Kansas City Chiefs.

With Courtland Sutton blooming into a dominant receiver on the outside and Jeudy posing another threat opposite of him, Hamler has the opportunity to blow the tops off of defenses. There’s no guessing about Drew Lock’s arm strength, so having a real burner like Hamler opens up all kinds of possibilities to push the ball down the field.

By adding not one, but two potentially game-changing receivers to this offense, the Broncos haven’t only helped out Drew Lock. They’ve also helped out their budding superstar in Courtland Sutton. The third-year receiver out of SMU had a sort-of breakout sophomore season in 2019, catching 30 more passes and allotting over 400 more yards than his rookie season in 2018.

One word that sticks after watching #Broncos WR Courtland Sutton this offseason – PHYSICAL!

Sutton showed that he could be the big target receiver, but without productive receivers opposite him, Sutton could face more double teams and brackets. Denver traded veteran receiver Emmanuel Sanders to San Francisco last season, leaving the Broncos with Tim Patrick and DaeSean Hamilton behind Sutton. Both receivers show promise, but Patrick has had issues with injuries, and Hamilton has shown inconsistencies in his play. Now that Denver has Hamler and Jeudy, Sutton could potentially play the same role as Demaryius Thomas did.

With Sutton, Jeudy, and Hamler taking attention from multiple defenders, it can open up more running lanes and opportunities for mismatches. The impact may not be seen right away, but having these two weapons on the Denver Broncos could turn a struggling offense into one of the most explosive offenses in the league. 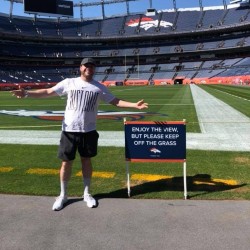